It’s been less than 24 hours since I arrived home from Berlin and I wasn’t sure whether to write this post or not. I kinda just want to forget about the weekend, but I always think it’s important to remember this feeling.

On Sunday, I stood at the start line of the iconic Berlin Marathon. This race has been the focus of my training for this entire summer. Back in May, I created a twenty week training plan, and then I stuck to it. I did the early morning runs, the long slow runs and the speedy interval runs. I ran up and down the mountains in France on holiday, whilst Rob and Jude were still sleeping. I even ran on the beach in Mexico. I have never trained so consistently for a race before. I felt much faster and fitter than last year, the hard work was paying off.

After a week holiday in Mexico, we can home and was keen to back out on the road. My first run was a slow six miles and it felt easy. That weekend was my last scheduled long run before the race, eighteen miles. I set off with my Terrex backpack loaded with energy gels and water. I got thought that run and I was feeling pretty good. It gave me a confidence boost and I planned to focus on speed work for the last few weeks of training. Everything was going great until the next morning when I woke up, I stepped out of bed and I felt a sharp pain in the sole of my right foot. It was so painful that I couldn’t put my foot flat on the floor. But to be honest, I wasn’t too concerned at first, after running eighteen miles you can expect to have a few aches and pains the next day right? I just thought that after a few days it would be gone. Unfortunately, the pain didn’t go. I started icing it everyday, (I’m still not sure if that was a good or bad thing to do) I went to see a physiotherapist. He told me to completely rest until the race. No running at all. So that is what I did. 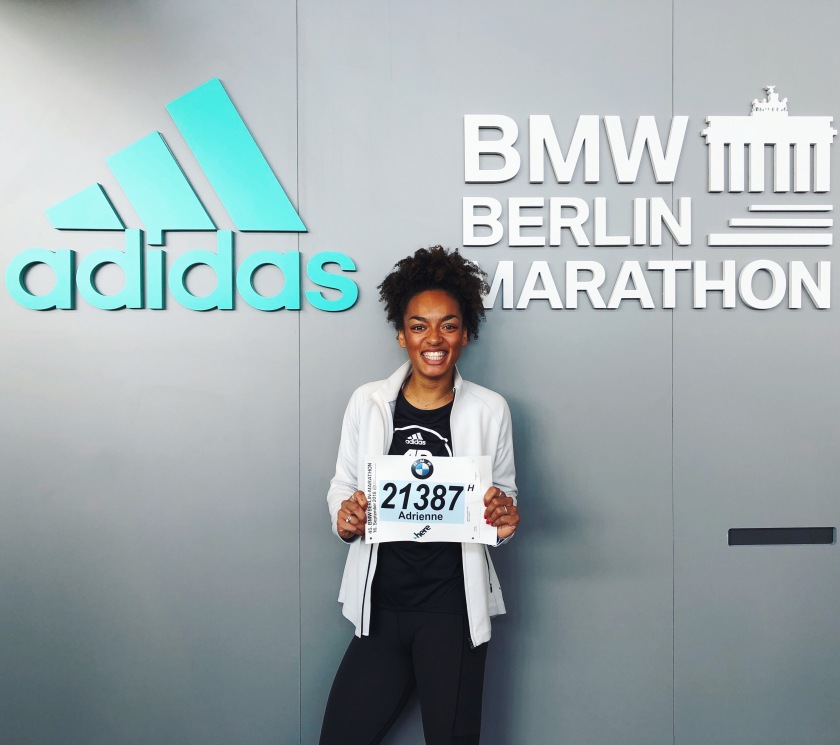 I stood at the start line feeling nervous. I started having flashbacks of running the London marathon last year. I started thinking about the pain of those last few miles. But then I started to think about all of the training that I had done this year. All those miles. I knew that I had put the time in so I told myself that I was ready. I thought that my foot would no doubt be hurting by the end, but I did not think for one second that I wouldn’t be able to finish the race.

Standing in a crowd of forty seven thousand runners is pretty incredible! As I ran across the start line, I was buzzing! I had spotted a pacer and decided to stick with him until the half way point. I started talking to another AR runner who was also following the same pacer. We decided we’d stick together.

The race course is epic! The crowd was cheering us on and the sun was lighting up the streets. As we came past the 4 mile sign, I was already starting to feel pain in my foot.

In my mind the race was split up into three sections. Miles 1-10 warm up, 11-20 hard work & 20-26 survival. I tried to relax and I told myself this is just the warm up. By the time I reached mile 10, the pain in my foot was constant, it was hurting with every single step. Looking back, I know this is the point that I should have stopped. This is when I knew that I might not make it to the finish line. BUT, instead of stopping I let me ego take over. I was telling myself that it was going to be mind over matter. I tried to forget about the pain and I put my headphones in and turned the music up. I walked through the next water station, and made a deal with myself. As I looked up at the 20K sign I thought, if you can make it to 30K you can finish this race. I set off running again.

I reached the 25K sign and the pain was unbearable. I was running on my toes because it hurt too much to put my heel down. That’s when I had to stop. I knew I couldn’t finish like that, I still had another 19K to go. I felt so angry and frustrated! I stood at the side of the road and watched hundreds of runners run past. I limped over to the medics, I took my phone out and sent a text to Rob. ‘I’m out’.

After two hours in hospital, I saw a brilliant Dr who examined my foot. FYI when you’re running a race, you’re not carrying your purse with you. I had no ID, no proof of address and no cash. I had to text Rob to get his credit card info. (You can then claim the money back from your travel insurance.) The whole situation was a drama and not the way that I had imagined the day going at all! Anyway, the Dr strapped my foot very tightly to stop anymore swelling, gave me a strip of painkillers and the address for a clinic to go and collect a set of crutches.

I got back to my hotel room feeling very sorry for myself. I couldn’t actually believe that I had flown all the way to Germany to do a race and I didn’t even finish. I really wished that my flight was booked for that night so I could just go home. I knew that all of my friends were out partying to celebrate and I was stuck in my hotel room on my own, eating a massive bar of chocolate. Thank God for chocolate!

So, two days later I am back home and I’ve finally written back to everyone that had sent me a message. It turns out people really don’t care if you cross that finish line or not. Every single message has been so encouraging! I’ve stopped feeling upset that I didn’t finish, I am proud that I laced up, I took on that brutal race and I gave it everything that I had. Injury or not, anything can happen on race day. Running a marathon is no joke.

I’ve done it before and I know that I will do it again. Who knows, I might even head back to Berlin next year. But for now I am going to focus on rest. The whole summer of training has been tough. It’s been a huge time commitment too. I’m also going to try not to complain about not being able to run for the next few weeks. I am going to respect my body and be grateful that it will heal. I know that health is a luxury that unfortunately isn’t given to everyone.

For anyone else who is injured at the moment, let me know what you’re doing to recover? I’m booked into a Cryotherapy session next week. I’ve never tried it before but I’ve heard good things.

As always you can hit me up on social @adrienne_ldn Stay tuned, I’m already plotting my comeback!